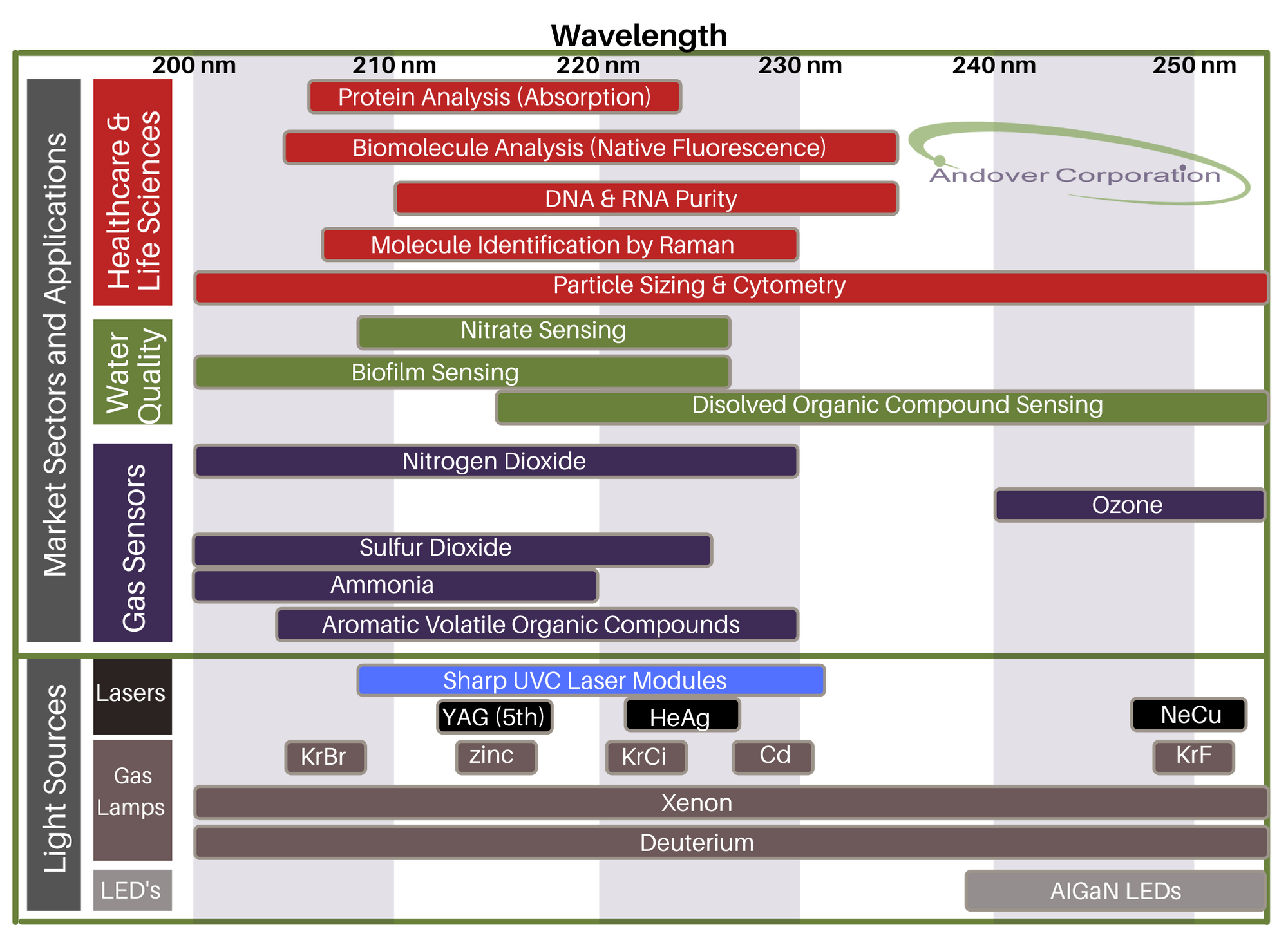 The development of modern ultraviolet (UV) analytical techniques began with the work of Phillip Baumeister in 1959. He realized that multilayer thin film filters would be necessary to accurately isolate the wavelengths of interest in many applications. Since then, the continued advancement of instrument technology is driving exponential growth of new applications. Consequently, the demand for UV optical filters is at an all-time high. This article will detail many of the applications and wavelengths associated with UV filters and will also illustrate why they have become essential to their industries.

In December of 1952 a severe historical air pollution event, the Great Smog of London,  set in on England.Coal burning released vast amounts of sulfur dioxide into the air. At the end of five days, over 4000 people died with another 100,000 becoming seriously ill. The effects of the smog were long-lasting and the present-day estimates now rank the number of deaths to have been about 12,000. This catastrophe initiated extensive environmental reforms worldwide. The 214nm filter is effective in detecting the presence of sulfur dioxide and other airborne contaminants. Sulfur dioxide combines with water vapor in the atmosphere to form sulfuric acid that can lead to highly toxic urban smog and/or acid rain. Rapid identification of increasing levels of this contaminant provides regulatory authorities the time they need to institute mitigation efforts. The 214nm bandpass filter is also useful in monitoring the off-gassing of toxins from heat treating, chemical cleaning, plating and other industrial processes.

Long before COVID-19 (COrona VIrus Disease-2019), as far back as 1878, UV light was used for the sterilization of both bacteria and drinking water. This is typically accomplished at 253.7nm and 280nm. A bandpass at these wavelengths will help eliminate stray unwanted light. These wavelengths, however, have been found to cause damage to an individual’s skin and eyes. For the past decade, UV sterilization has made a resurgence. More recently, research done at Columbia University and other places have shown that utilizing Far UV-C light in the lower wavelength regions between 207nm and 222nm can be effective at killing pathogens while remaining safe for human exposure. The 214nm and 220nm filters are used to filter out harmful UV light while emitting the light necessary for sterilization.  UV is also highly effective in eliminating the odor causing bacteria associated with biodegradation.

In 1960 the first laser was built by Theodore H. Maiman. At the time it was billed as “A solution looking for a problem”. Today, lasers are being used to solve problems worldwide for a seemingly limitless number of applications. The 226nm laser is used in hypersonic flow velocimetry, molecular fluorescence microscopy and the prevention of viral infections, sensing and deodorization. At 248nm the Krypton Fluoride laser is used for semiconductor integrated circuits, photolithography, nuclear fusion experimentation, micromachining plastics and many other applications.

Andover Corporation has over 45 years of extensive experience designing and manufacturing the highest quality ultraviolet filters. Our filters are used worldwide to help detect and prevent environmental catastrophes, filter UV light for sterilization and all of the other scenarios mentioned above. If your application requires UV filtering, Andover Corporation can meet all of your requirements.

A consensus of opinion throughout the optical filter industry has developed over the...
Read More

If you were to look at the number of females that are currently working in the Science, Technology,...
Read More